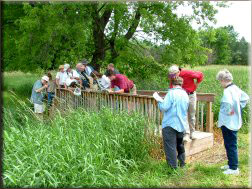 Have You Heard of Us? We are The Jaques Chapter of the Izaak Walton League – we also promote conservation in the Mahtomedi area!

The Jaques Chapter is part of the Minnesota Division of the Izaak Walton League of America, a volunteer-based group that organizes its members to protect wildlife and educate others about the value of conservation. We are located in Mahtomedi and we hold meetings at the Wildwood Branch Library (763 Stillwater Rd., Mahtomedi). We have hosted several well-attended events in the area, such as the recent water policy and management discussion titled, “Running On Empty? Managing Minnesota’s Water,” which featured speakers Rep. Peter Fischer and the Met Council’s Sandy Rummel.

The Jaques Chapter was organized in 1964, with an initial focus on the management of the Boundary Waters Canoe Area. This focus gradually shifted to wetlands, biological diversity, and other conservation issues in the northeast metro area.

In 1967, a man named Carl Schuneman donated most of a 100-acre, marshy tract of land to the Jaques Chapter. This land lies 2 miles north of White Bear Lake and it is known as the Schuneman Marsh. The Schuneman Marsh still holds great value. Many Boy Scout projects have involved the Schuneman Marsh, and conservation and recreation projects continue on the marsh to this day.

Throughout the 40-plus years that the Jaques Chapter has been organized, we have spread the word on conservation and environmental protection through public information, meetings, and presentations with speakers on current topics of concern.

Our official mission is:

“To conserve, maintain, protect and restore the soil, forest, water and natural resources of the United States; to promote means and opportunities to educate the public with respect to such resources and their enjoyment and wholesome utilization.”

Specifically, we work to:

Share on FacebookShare on TwitterShare on Linkedin
← Get Involved in IWL!
Race to Reduce →