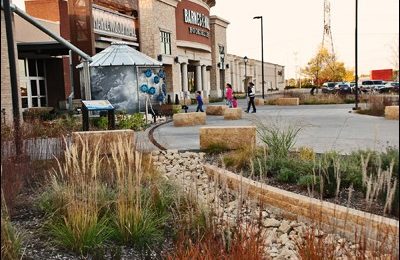 If you live in the East Metro, chances are you have been to the Maplewood Mall at least once – it’s a large shopping center just off of highway 36. But have you noticed the innovative stormwater management practices the mall uses?

Beginning in 2010, the Ramsey Washington Metro Watershed District (District) worked with Maplewood Mall to create the Maplewood Mall Rainwater Runoff Retrofit Project. This was intended to reduce phosphorus and sediment pollution in the nearby Kohlman and Gervais Lakes, which feed into the Mississippi River. And let me say – they have been successful!

The entire project was completed in 2012 and has resulted in capturing and filtering 20 million gallons of stormwater runoff every year, which amounts to 67% of all the water runoff from the parking lot. According to District measurements, this is estimated to reduce phosphorus in the watershed by 60% and sediment by 90%.

The district used many different best management practices for stormwater management at Maplewood Mall. These include:

With results management practices like these its not surprising that the Maplewood Mall project was presented two prestigious awards including the Grand Award for the American Council of Engineering Companies and the Project of the Year award from the Minnesota Association of Watershed Districts.

Awards are nice, but the greatest reward of this project is its benefit to East Metro water quality. The Maplewood Mall rests on a critically important area for Mississippi River water and thes

e changes will ensure our drinking water is cleaner and safer for all.

Want more? This article in Land & Water magazine summarizes the mall project and clearly states the significance of this project: “Numerous cities and metropolitan areas in the U.S. are faced with the challenge of trying to meet pollutant reduction goals for impaired waters in fully developed urban areas.” Thankfully, the Ramsey Washington Metro Watershed District has made great strides in showing how we can overcome this challenge.