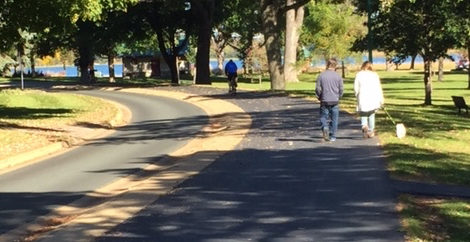 A group of MAGI members and others are leading the charge to push to completion a 16-year-old effort to provide safe walking and biking around White Bear Lake and beyond. Known as the Lake Links Coalition, the group includes individuals from nearly all the political jurisdictions involved and is still growing.

The starting point for the effort  is a Lake Links Trail Network Master Plan completed in 2001. Under the sponsorship of Ramsey and Washington counties and the Minnesota Legislature, a group of technical advisers and prominent citizens devised a plan to link existing trails and enable pedestrians and bicyclists to safely pass through the White Bear Lake area, including along and around the lake itself. You can read and download a copy of the plan here.

The City of White Bear Lake has made great progress on the portion of the project that lies within its borders, but little has been accomplished elsewhere to date. The Lake Links Working Group aims to move the plan forward through a two-stage process.

In the first stage, the group will identify the best currently available route around White Bear Lake and mark it with Lake Links signage. This will promote walking and biking in the area while also drawing attention to several very dangerous segments that remain obstacles to safe passage past and around White Bear Lake. The group will also identify visual, cultural and historic sites along this interim route; work to rally public and political support for completion of the route; and advocate with public officials to remediate the dangerous segments.

Race organizers have to use cones to gain sufficient passage for runners on narrow stretches of road around White Bear Lake. Photo courtesy of Steve Wolgamot.

The second phase of the project involves completion of acceptably safe paths or sidewalks on dangerous parts of the route.

“Most significant in this regard are Minnesota 244 in Mahtomedi and Dellwood, and South Shore Boulevard on the south side of the lake,” said group spokesperson Steve Wolgamot, a longtime area resident. Minnesota 244, which Wolgamot says lacks useful paths or trails, comprises about 3.5 miles or roughly one-third of the route. South Shore represents about another 15 percent of the route.

The Minnesota Department of Transportation recently acknowledged that it controls right of way that should be useful for pedestrian and bike travel along the route, making it possible to bring the route in compliance with the Americans with Disabilities Act and with Minnesota’s Complete Streets statute. Cities around the lake have expressed a willingness to cooperate, although MNDOT does not require city approval for projects within its right of way, according to Wolgamot.

MnDOT owns more than 60 feet of right-of-way along this portion of Highway 244 — plenty to create safe passage for walkers and bicyclists. Photo courtesy of Steve Wolgamot.

Many of the initial members of the Lake Links Coalition are also affiliated with the Mahtomedi Area Green Initiative, which is a partner in the effort. Persons who acknowledge the need for our children, our grandchildren and ourselves to be able to travel safely through the area without cars are invited to join the Lake Links Coalition and help make this plan a reality! To learn more or sign up to help, contact are Steven Wolgamot, (kwolgamot@comcast.net) or Mike Brooks,  (nebikewalk@gmail.com).

Additional information and printable copies of maps are available at www.zappf.org.